The Brooklyn Bridge's new two-way bike path is an improvement, but at only 8 feet wide, the two-way protected bike lane falls short of the recommended 12 foot width outlined by NACTO standards. The narrow width is especially troublesome because additional space is needed to account for the inclines on and off the bridge. 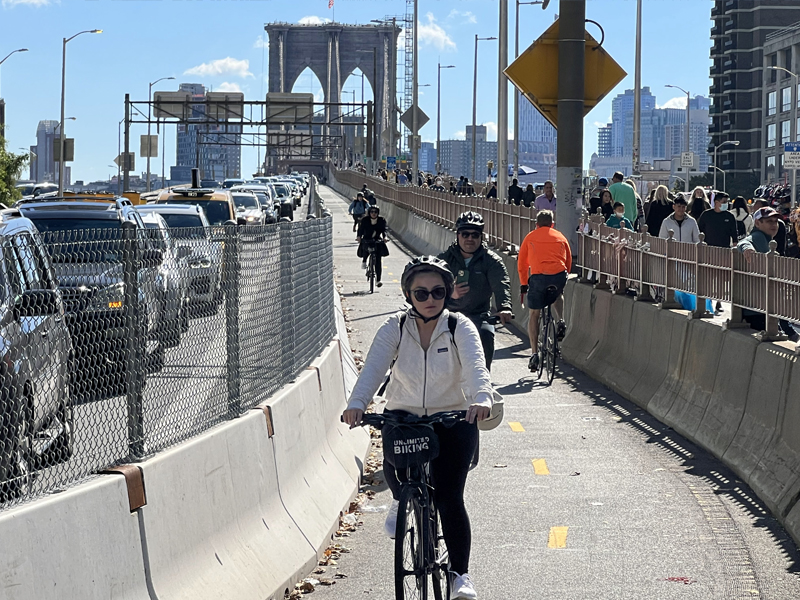 The new bike lane has only enough space for a single file line of bicycles in each direction, so cyclists will not be able to cross at different speeds. This design limits access for less experienced people on bikes and families riding with young children. The lane is also too narrow for 55-inch cargo bikes. #Bridges4People asks that another car lane on the Brooklyn Bridge be repurposed to create wider, safer protected bike lanes that are able to serve more people.

By the way, the Brooklyn Bridge used to be a lot more people-centric: in 1907, it carried 426,000 people daily — twice the number of people it carries today!

The Manhattan Bridge's two-way bike path is 9 feet wide at best, and 6.5 feet wide at its narrowest because of obstructions. This design falls short of the recommended minimum 12 foot width outlined by NACTO standards and is far too narrow for 55-inch cargo bikes. 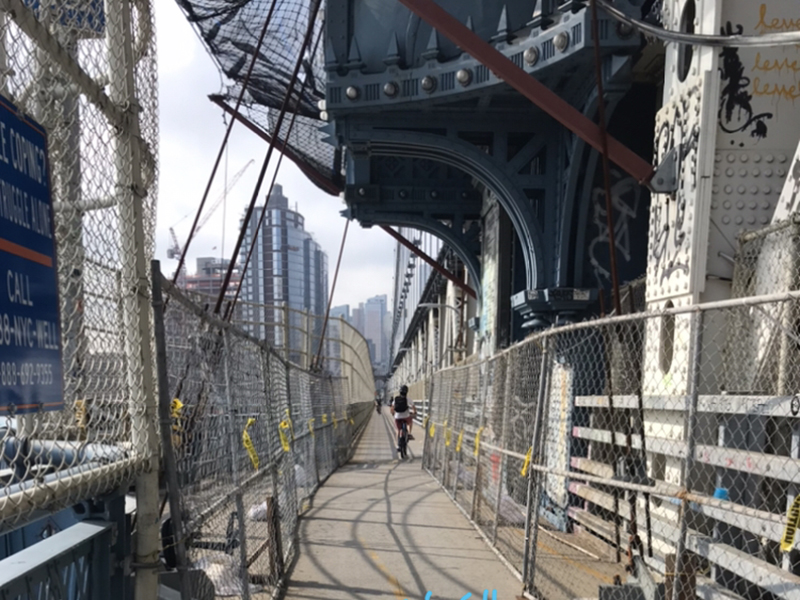 The Williamsburg Bridge two-way bike path is only 11 feet wide and isn't physically separated from the 7 foot wide pedestrian path. This design falls short of the recommended minimum 12 foot width outlined by NACTO standards and is too narrow for 55-inch cargo bikes without spilling over into the pedestrian space.

When the bridge is busy, cyclists shouldn't need to spill over onto the pedestrian space. #Bridges4People asks that two car lanes on the Williamsburg Bridge be repurposed to create wider, safer protected bike lanes.

It's important to consider the adjoining bike networks as well: bridges take people places, and those places also need to be safe for cycling!

Much of Downtown Manhattan's streets have no dedicated spaces for bikes, and very few of the specified bike paths are protected bike lanes. #Bridges4People asks for safer protected bike path connections to the Brooklyn, Manhattan, and Williamsburg Bridges, including:

The Brooklyn side of the bridges also lacks safe bike path connections. Necessary improvements include:

Still have questions about the #Bridges4People campaign? Check out our FAQ page or reach out!