Come to our next virtual work party on Wednesday at 7pm!
English | Español | 繁體中文

#Bridges4People toured the various applications of bike lanes on city bridges and connecting street networks at the first annual Citywide Summer Ride! Participants met activists from all five boroughs and gained a better understanding of bike infrastructure across the city. Council Members Brad Lander and Stephen Levin spoke at the rally before the ride.

Great to see the riders off this am for @TransAlt's #Bridges4People Citywide Ride to demand bike lanes on bridges & connecting street networks.

Unbeknownst to Robert Moses, the bike lanes on the Verrazano have been there all along — they just need to be liberated from the cars! pic.twitter.com/VLRwlA1YW5

The ride consisted of three legs totalling 28.4 miles, and the route created by Bronx Activist Lucia Deng can be found here.

The Citywide Summer Ride was a collaboration with Transportation Alternatives committees from all five boroughs, including activists working on The Harbor Ring and the #WashingtonBridge4People campaign.

Great ride today with @bridges4people and @TransAltBX advocating for more space on MTA owned Bridges, specifically the Verrazano, Triborough and Washington Bridges! From BK, to QNS and the Bronx we all agree we need more space for Cyclist and Pedestrians on Bridges!#bikenyc pic.twitter.com/3zDCl7qjqv

Brooklyn Activist Juan Serra made an incredible video of the third leg of the ride:

City Council candidates from District 1 and 33 joined #Bridges4People for a ride from the west side of Lower Manhattan to and across the Brooklyn Bridge and then back over the Manhattan Bridge. Even though the Hudson River Greenway is the busiest bike path in the United States, it still isn't well connected to the East River bridges.

If you missed the event, you can watch a recording of the rally before the ride:

If you missed the event, you can watch the recording on YouTube:

To show our love for riding over the East River Bridges, on Valentine's Day we created a heart-shaped self-paced ride for our supporters:

Our first big win: a car lane on the Brooklyn Bridge will be converted into bike lanes!

Mayor Bill de Blasio announces that a car lane would be converted into bike lanes on the Brooklyn Bridge (and the Queensboro Bridge, too)!

While #Bridges4People is still holding out for two car lanes to be converted on the Brooklyn Bridge and for better bike lanes on the other two bridges that connect Brooklyn and Manhattan, this is a step in the right direction.

Since we're weren't able to connect in person but still are committed to mobilizing New Yorkers behind our movement for safer, more equitable, and more sustainable bridges, we hosted a virtual Friendbank! event.

At the event, we talked about the goals of the campaign and shared the #Bridges4People petition with other New Yorkers we're connected to - our family, friends, Facebook friends, and coworkers.

If you weren't able to make the Friendbank! event, you can still sign and share our petition!

The Bronx TA activist committee started Hallowheel in 2016, and we need better infrastructure to connect all 5 boroughs now! 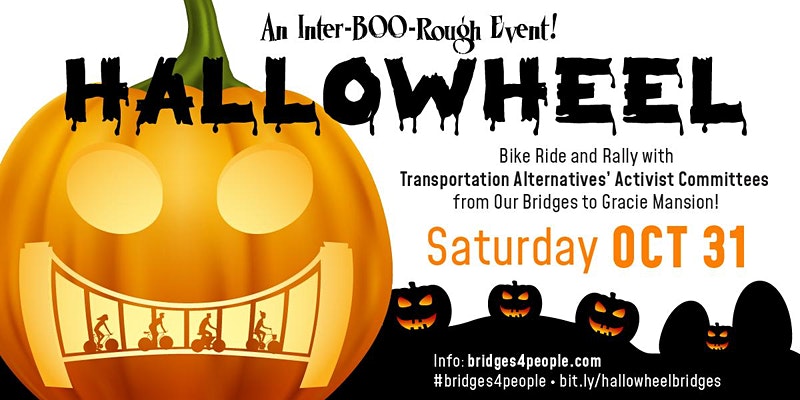 Each borough hosted a distanced costumed ride across some of our city bridges. During the rides, we shared scary stories about the lack of safe biking infrastructure and history around the bridges. The rides converged at Gracie Mansion for a distanced costume contest and rally, complete with candy prizes for the best costumes from every boo-rough and...the mayor and DoT.

#Bridges4People supporters crossed all three of the bridges that connect Manhattan and Brooklyn on foot to show Mayor de Blasio that our East River bridges should prioritize people over cars. 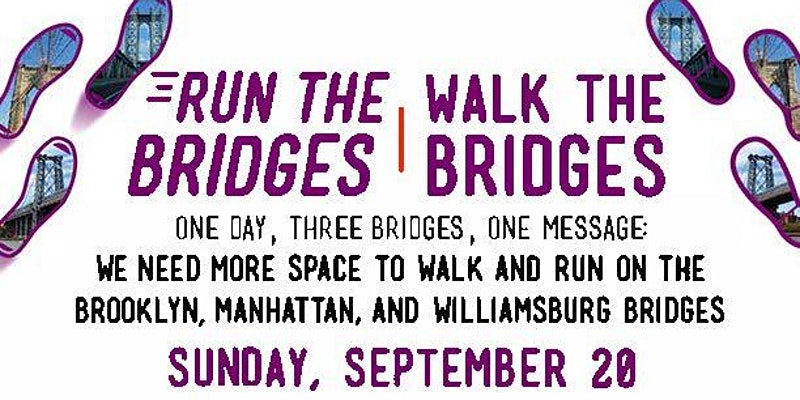 Based on TA's 5 Boro Pizza Challenge but mindful of social distancing, we headed to five food establishments near the bridges to enjoy great food, explore the neighborhoods, and send a message to de Blasio that we need more space for pedestrians and cyclists on our bridges. 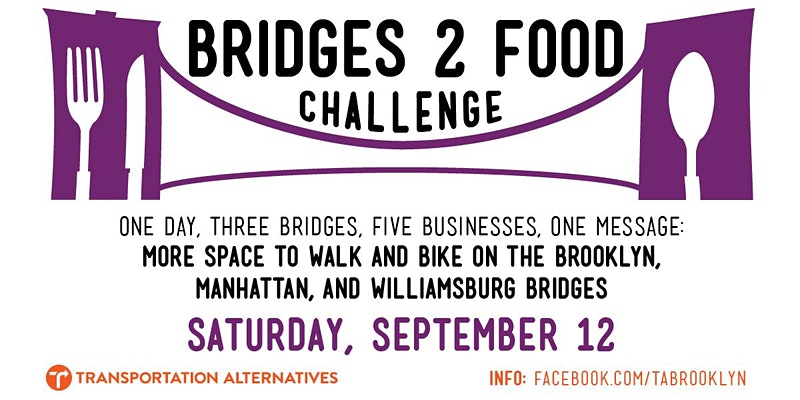 Check out some of our #Bridges2Food adventures on on Twitter!

Our campaign kicked off with a launch rally at the parklet near the Brooklyn-side bike entrance to the Manhattan Bridge! A variety of speakers discussed why we need #Bridges4People.