Many of the biking connections to the bridges connecting Brooklyn and Manhattan need substantial improvement. To kick off our focus on improving these connections this spring, Bridges 4 People hosted a rally and ride to showcase recent wins and highlight current issues for pedestrians and bicyclists along approaches to the Manhattan Bridge. Safe bicycling infrastructure needs to be part of a connected, protected network because no one's trips just go over a single bridge or along a single street.

Getting to them is putting your life in danger, and it shouldn't be that way. Biking through Downtown Brooklyn to get to the Brooklyn Bridge, it's impossible. Biking over that entranceway to the Manhattan Bridge is terrible. Every single time, I feel like I'm putting myself in danger.

Brooklyn Borough President Antonio Reynoso discussed how much has changed to improve transportation in Brooklyn and how his office is pushing to complete the tranformation of streets across Brooklyn. Assemblymember Jo Anne Simon talked about how parked cars in bike lanes make her district difficult to traverse and called for protected bike lanes. Council Member Shahana Hanif of the 39th Council District was unable to join us, but shared a speech to be read on her behalf, including:

Across our City, bike paths are a dangerous route to take. They are poorly protected, routinely ignored, and their haphazard connections can create treacherous conditions for cyclists. Some of the worst chokepoints are our City's bridges. These bridges should be the crown jewels of our cycling networks, but far too often they have dangerous points of entry that make their journeys hazardous.

Bridges 4 People activist Aruni Ranaweera shared her story about being hit while running the in former shared bike and pedestrian path on the Brooklyn Bridge and noted "when the city prioritizes space for cars, they crowd the rest of us together and force us to be a danger to each other." If you missed the rally, you can watch highlights from the speeches and the ride:

After the rally, we biked from Downtown Brooklyn to the Manhattan Bridge and then to Times Plaza along another bridge connection. Our route drew attention to numerous places where improvements to prioritize people walking and biking could be made: 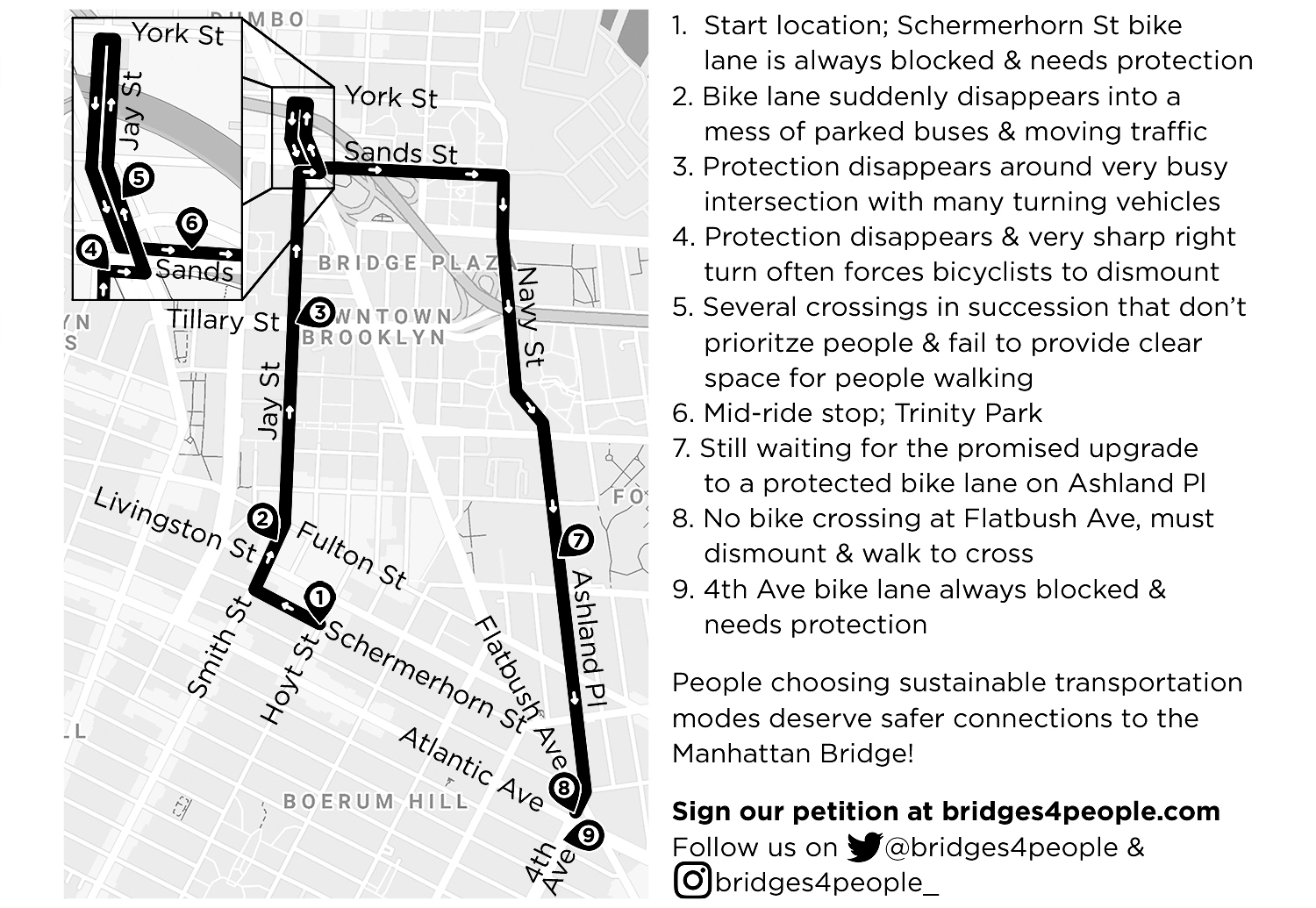 Many streets along our route were promised upgrades to bicycling infrastructure that have yet to be realized. In 2019, DOT promised that it would fill in the unprotected gaps of the Jay Street protected bike lane. While some segments were upgraded, others remained unprotected. The bike lane disappears on the block between Livingston and Fulton Streets where people biking must navigate around buses with neither dedicated space nor protection. The protection disappears again around the busy and wide intersection with Tillary Street and as you approach Sands Street, where the entrance to the Manhattan Bridge bike lane can be found. In 2020, Mayor de Blasio promised a new protected bike lane along Ashland Place and Navy Street from Hanson Place to Sands Street and promised to finish the protection on 4th Avenue from First Street to Flatbush Avenue, but these promises remain unfulfilled and force bicyclists to navigate unprotected lanes that are often blocked. We're hopeful that Mayor Adams will direct DOT to fulfill the promises to protect these key routes.

We also saw numerous opportunities for better pedestrian spaces along our route. The area under the Manhattan Bridge needs dedicated pedestrian crossings so people walking and biking don't have to share tight spaces, and if cars were no longer allowed to park on the cobblestone sections here, there could be even more space for people.

Architect Betty Rexrode showed us the untapped potential of Trinity Park, the currently abandoned space inside and around the bicycle entrance to the Manhattan Bridge.

Let’s repurpose Trinity Park from a parking lot to a joyful place for New Yorkers pic.twitter.com/jig4EC51BK

Once two car lanes on the Manhattan Bridge are turned into wider bike lanes that meet national standards, the current tiny bike lane would become additional pedestrian space on the bridge, and Trinity Park would be the entrance to that space. Currently, this space is inaccessible, blocked off by chainlink fences and misused as parking, but a reactivated Trinity Park would provide four additional acres of gorgeous park space to New Yorkers.

Finally, our ride ended at Times Plaza, the triangle between Flatbush, Atlantic, and 4th Avenues at Atlantic Terminal. All three of these streets are very wide and difficult to cross on foot, and the intersection of Atlantic and Flatbush is one of the most dangerous intersections in Brooklyn. This cluster of intersections and unnecessarily wide streets must be redesigned so no more people walking and people biking are at risk.

Thank you to everyone who was able to join us for this fun and informative event! Bridges 4 People looks forward to working with you to get better connections to the East River Bridges!